When Is It Time?

When Drs Joan Coates and Gary Johnson of the University of Missouri announced their discovery of the SOD1 gene in 2009, Max, my first DM-affected boxer, had already been gone for nearly 3 years.


Actually, I say that Max was my first DM-affected boxer, but the truth is, if I had been more observant and had known what DM "looked like" at the time of his dam's death at the age of 10 in 1999, I would have recognized that she was showing the first signs of DM just months before she succumbed to congestive heart failure.

In any case, once a DNA test was available and Dr Coates started publishing statistics showing the extremely high incidence of DM in American boxers, it was obvious that we breeders had dug ourselves into a deep hole that we weren't going to climb out of anytime soon. As for trying to assign blame or trace this hereditary affliction back to its source, what would be the point? DM is a late-onset disease, so breeders and owners didn't know back in 1989, when Max's dam was born -- or even in 1994 when Max was born -- that their dogs were affected until years after they'd been bred, and in many cases they never knew.  If a dog or bitch that carried two copies of the mutant gene died at 7 or 8 or 9 of heart disease or cancer, how could an owner have known?


Despite that Dr Coates' research has been published in one of the most prestigious scientific journals and that no one to my knowledge has ever reported a DM clear or carrier boxer that developed DM, Dr Coates has acknowledged from the beginning that she doesn't have all the answers and actively continues to research the disease and the SOD1 gene. She has also declined to offer hard and fast breeding recommendations, instead saying, "...We recommend that dog breeders take into consideration the DM test results as they plan their breeding programs; however, they should not over-emphasize this test result. Instead, the test result is one factor among many in a balanced breeding program." Source: http://www.caninegeneticdiseases.net/DM/testDM.htm


Even without Dr Coates' cautions and caveats, it should be plain that we cannot all breed to the less than 13% of the breed that's DM clear; and that therefore, we cannot sit in judgement of the breeding decisions made by our fellow breeders.

But deciding how to plan your breeding program around the DM carrier or at risk dog or bitch you already own is just one of the hard choices we have to make. Since many of us are already living with an at risk or affected dog, we also have to make a decision about when to release our longtime companion and protector, super performance competitor, or once-in-a-lifetime winner and producer from his or her failing body. And since this is a decision that those of us who are caretakers can't delegate, I strongly believe that we need to choose the time that is right for ourselves, as well as for our dogs. Because just as we cannot judge others' breeding decisions, I also believe we cannot judge the end-of-life decisions of the boxer owners who are faced with the reality of a paraplegic dog.

For Max and me, it was finally time when he became incontinent (part of the ugly progression of the disease) and I had to leave him unattended 10 hours a day while I worked. For Max's son Bobby, pictured below, it will be time when his feet slip from under him again on the "path" of non-skid throw rugs that lead from his crate to the back door, and he can't get back up by himself. Because the fact is I am no longer able to lift an 80 lb dog.

For other boxer caretakers who are younger and stronger than I, or who have a partner who can help with the care of their rapidly deteriorating companion, a cart may provide a temporary respite and enable them to delay the inevitable decision. And for a few incredibly selfless and dedicated boxer owners, it is time when they can arrange to travel to a university vet school so their boxer's untimely death can contribute to DM research, which may some day result in the development of a treatment for dogs with DM and humans with ALS (Lou Gehrig's Disease).

With Max, I allowed someone who loved him, but was not responsible for his daily care, to pressure me into maintaining Max in a "half-life" long past when it was time for him to go. Unfortunately, there are too many people, family, friends and complete strangers on Internet lists, who think they know better than even an affected dog's owner when it is time. Don't listen to them -- they cannot know what's right for you. 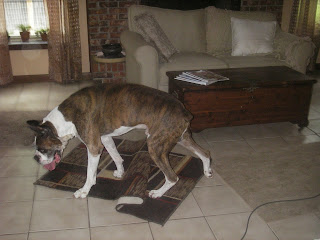 Posted by Virginia Zurflieh at 8:50 AM