THIS IS THE FACE OF BLOAT by Kate Connick

Editor's note: My thanks to Boxer owner extraordinaire Kate Connick for sharing this "bloat early warning system" with those of us who have never experienced the condition in the dogs we live with. And for providing the best home for one of my puppies this breeder could ever have hoped for.

Yes, Tonka experienced GDV (gastric dilatation and volvulus, aka bloat/torsion) on Tuesday. This isn't an uncommon disorder, and I'm sure some of you have experience with it. My very first exposure was watching a neighbor's great Dane die this way when I was a kid. Horrible way to die, I might add.  But some of you haven't had firsthand experience with bloat, so I figure I'll share Tonka's tale to make it real for you. If you aren't already familiar with GDV, you want to know about it - whatever kind of dog you have. This is potentially one of the ugliest, most urgent and lethal situations that you may face as a dog owner, and you don't want to be farting around online asking people what they think about your dog's retching and pacing as he slowly dies in front of you. Take a few minutes to learn so that you're prepared. 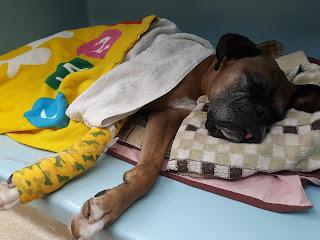 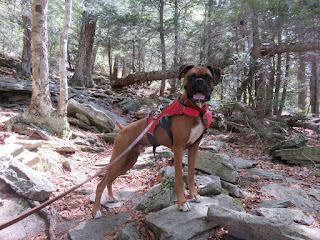 Posted by Virginia Zurflieh at 10:58 AM