The following is a tribute written by Dr Bruce Cattanach to his dear friend Joan MacLaren, a noted Boxer fancier who died on November 28 of cancer. As you read Dr Cattanach’s words, you will see that our breed has also lost a dear friend, who honored the traditions established by Frau Friederun Stockmann (see the photo at the bottom of this page), while at the same time, acknowledging and combating “modern-day” Boxer health threats like ARVC. Our deepest condolences to Joan's family and friends.
~~~~~~~~~~~~~~~~~~~~~~~~~~~~~~~~~~~~~~~~~~~~~~~~~~~~~~~~~~~
“Death lies on her like an untimely frost
Upon the sweetest flower of all the field.”
Joan MacLaren
Joan MacLaren of the long-established Scottish Braxburn Boxer kennel died peacefully on the Saturday morning, 28th November after a short but fiercely fought battle against lung cancer.  Only a few weeks ago she was hammering away about Boxer cardiomyopathy and the new kidney disease in the breed, while excitedly telling me about a discovery she had made about the origins of the Boxer in some writings of Frau Stockman, perhaps the most important person in the development of the breed in .  But Joan’s main concerns at that moment were for her husband and family.  Such was Joan’s life, and her dedication to everything important to her.
Joan had an intense interest in animals and animal breeding from her school days.  Boxers quickly became her breed of interest, and she started showing in the early post-war period, but when she married Jimmy MacLaren of Viewpark Scottie heritage, Braxburn Boxers were surely set to make waves.  And they did.  Numerous champions and significant winners were produced, but it was really the breeding rather than showing, that attracted Joan.  Any visit to Braxburn kennels demonstrated dogs that never got near the show ring.  They commonly lacked the flashy white markings demanded for the show ring, but invariably were of such excellent type and conformation that one could never help but be impressed.  Presented free-standing as Continental practice, they showed a consistent picture of the archetypal Boxer.
And type was Joan’s watchword.   She was an ardent follower of Frau Stockman, and had absorbed all her teachings on what a Boxer was and what it should be.  Her friendship with Otto Donner, one of the main breed wardens for the German Boxer Club up to a few years ago was also a big influence.  As a consequence of this Joan had very clear views on Boxer type and was quite forth-right in expressing these views which very often were not in accord with those in the British show scene, but she always stuck to her guns.
Breeding animals invariably leads to unwanted defects at some time or another and Braxburn had its share.  It was touched by the neurological disease, progressive axonopathy, in the 80s and Joan did all she could to help the establishment and operation of a breeding controls scheme that ultimately proved totally effective.  When aortic stenosis was recognised as a breed problem, she had cardiologists from the vet school visit the kennels every year to test all her dogs as well as those of colleagues of like minds.  But it was an initially undefined heart condition in some of her dogs that caused her the most difficulties.  This was eventually found to be the heart disease, cardiomyopathy, that the breed is still battling today, but she never denied or tried to cover up anything.   Rather, she was immediately pressing the heart expert of the day, Professor Fisher of the , to investigate the problem.    For Joan anything and everything untoward was investigated and not swept under the carpet.
Joan was one of the earliest members of the Scottish Boxer Club and thereafter served the club in various offices.  She and Jimmy were the core to the educational programmes on type and conformation that the club offered decades before current judges’ training schemes were thought of.  Joan was a leading speaker in the British Boxer Club’s judges’ conference in the 80s.  She was also the Scottish representative on the Breed Council sub-committee dealing with the KC’s drive to standardise all the breed standards, much to her total frustration.
While the Boxer was Braxburn’s breed of main interest, the MacLarens also showed a number of other breeds, these including Bostons, Corgis, Pugs, Scotties, and Whippets, and they also had some notably CC level successes with Beagles.  In more recent years bantam chickens became a serious show interest and gave the MacLarens many successes.  Breeding for type was always the key element.
The MacLaren household was unique.  A cockatiel and a free-flying parrot ruled the roost indoors, and collections of the artwork of the multi-talented Frau Stockman as well as many other beautiful models and pictures adorned the rooms, but incubators with hatching chicks could often be found in odd places.  Out of doors, masses of chickens of various varieties and geese were to be found, and in earlier times Joan kept milking goats and ponies and also rabbits, guinea pigs, and even fancy mice.  Joan was the ultimate animal lover and stock breeder and she was a fountain of knowledge on all things concerned with animal breeding and genetics.
The Boxer breed has lost someone special with the death of Joan MacLaren.  Sympathies go to husband Jimmy, daughter Mandy and son Jimmy.  Joan will be greatly missed. 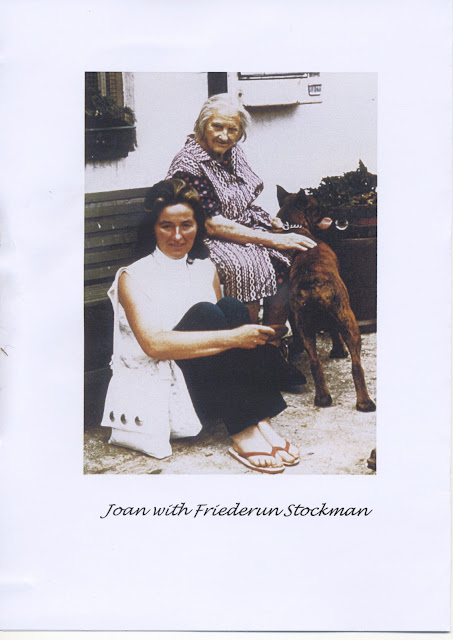 Because I was the secretary of both the ABC Health & Research Committee (HRC) and the American Boxer Charitable Foundation (ABCF) when Drs Joan Coates and Kate Meurs announced their gene discoveries and DNA tests in 2008 and 2009, respectively, I followed the research closely and published updates regularly as editor of the ABCF Messenger (www.abcfoundation.org).  Although I resigned from both the HRC and the ABCF Board of Trustees earlier this year, I have continued to research and write about Boxer health issues for this blog over the last six months, and have recently made an interesting observation: Even though there are still big holes in our knowledge of how DM “works” (e.g., no one knows what percentage of At Risk dogs will actually develop the disease), the DM test is being increasingly considered by North American Boxer breeders when they make breeding decisions; while the ARVC test seems to have fallen into a PR black hole. How did this situation come about? How did the DNA test that was going to enable Boxer breeders to breed away from ARVC instead become a lightning rod for controversy and disagreement among both breeders and researchers?
In my opinion, the most important reason for the broad acceptance of the DM test is that even though we can’t predict which or what percentage of At Risk dogs will develop DM, we can be certain that a DM Clear or Carrier Boxer will never develop the disease. (Dr Coates says “highly unlikely to develop DM,” rather than “will never develop DM”; but In the 3+ years since the DM test became publicly available, there hasn’t been a single report of a DM Carrier or Clear dog that has developed DM.)  Furthermore, there have been no reports of Boxers that developed clinical symptoms of DM, without having tested genetically At Risk.** In other words, regarding the most important aspect of a DNA test – the ability to identify both the presence and the absence of the mutated gene that causes the disease – what you see seems to be what you get when it comes to the DM DNA test.

Unfortunately, the same can’t be said of the ARVC test. When the test was first offered to the attendees at the 2009 ABC, breeders and owners rushed to snap up the available test kits, and used the detailed list of breeding recommendations almost as a catechism.
As test results began to trickle in, many breeders in all corners of the globe were horrified to discover that their beautiful new litter – bred before the test was available – was full of Homozygous Positive puppies (two copies of the ARVC gene) that were going to be impossible to sell as show and breeding prospects and presented an ethical dilemma even when placed as pets. Outstanding stud dogs became pariahs overnight, and breeding arrangements that had been in place for months and even years were canceled. But no one questioned the need to adhere to those stringent breeding recommendations; after all, this was a dominant gene, which meant that even dogs with only one copy of the “bad” gene had the potential to develop ARVC, and would pass it on to an average of 50% of their offspring.
Only a few months later, there were reports of ARVC Negative dogs that had been diagnosed with ARVC by board-certified cardiologists; and a noted geneticist announced that the test results on the 22 DNA samples he had submitted to WSU were not consistent with the disease status of the dogs whose samples he had submitted. (A subsequent test of DNA samples from 84 UK Boxers, submitted to WSU by several leading cardiologists and prepared to Dr Meurs’ specifications, produced the same inconsistent results.)  In the face of growing evidence that WSU’s announcement had been premature, unquestioning belief turned to skepticism, and ultimately, to disbelief.
Fast forward through the next two years: In the January 13, 2010 issue of the ABCF Messenger, Dr Kerstin Lindblad-Toh wrote “…the current testing [for ARVC] is not comprehensive…but we are working to make it better.”
In the May 2010 issue of the Purina Boxer Update (Vol. 9, No. 1), Dr Meurs wrote, “…While our test is a valuable tool, it is clearly not predictive in all Boxer populations.”
In the November 22, 2010 issue of the “Veterinary Times,” leading researchers in genetics and cardiology published an informal paper in which they concluded: “From the results, it can be seen that cases of boxer cardiomyopathy occur in dogs without having the striatin [ARVC-1] genetic mutation. Conversely, some genotype-positive dogs lead a normal life without ever manifesting the disease. Both the and data indicate that the search for genes implicated in boxer cardiomyopathy should continue.” [Emphasis mine]
Finally, in the September 2011 issue of the ABCF Messenger, Dr Meurs was quoted as saying that she stands by her findings and believes the ARVC-1 gene she discovered is the major cause of ARVC; but because of the current controversy over the test, she is working on other aspects of canine cardiology and has discontinued her study of ARVC, at least for the present. [Emphasis mine]
At this point, I think it’s obvious that the ARVC test is not a reliable means of breeding away from this truly horrible hereditary heart disease that is so widespread in our breed. And though my opinion can be easily discounted because I have no scientific or medical qualifications, I haven’t heard any endorsements of the test from prominent NA board-certified cardiologists, either.
What really distresses me about this situation, though, is not that a definitive test wasn’t produced right out of the gate – given the complexity of present day genetics and this disease, that is perfectly understandable. No, what I find most frustrating is that ARVC research – at least in the – hangs in limbo while we ignore the clear evidence that there is still much more research to be done before conscientious Boxer breeders have a way to breed away from ARVC.
Surely we can do better than this?


** Correction: Jennifer Walker just pointed out to me that the DM DNA test site now states, "of those cords submitted for evaluation, and where the cellular changes have been consistent with a diagnosis of DM, the dogs have had a DNA test result of A/A in all but 2 individuals."
The quoted test is in the 4th paragraph under "Understanding the DNA Test for Degenerative Myelopathy."
Posted by Virginia Zurflieh at 1:19 PM 9 comments: